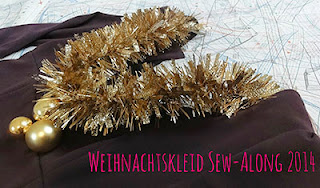 This week’s or better yesterday’s agenda:

Ohoh, I should hurry!
Only the hem left!
I could  retouch this and that
I’m done but won’t show
I’m way ahead and will add some accessory to my three dresses

my motto could be summarized with the first line only, I am far from being finished…

I am stuck! In many ways.
First, time is working against me. I have to work a lot (christmas + bookshop, well, you get it), I had a conference last week, went to the last lecture before christmas, had to discuss a lot of things with my professor and am working on my PHD-project. When I come home all I wish for is a glass of wine and Downton Abbey in the Blu-Ray-player.

Second, this project is so…demanding, claiming. Not that is is overly difficult, in fact it is fairly easy. And cutting large rectangles isn’t a challenge, even in plaid. But I hate all this concentrating on lines and patterns and grain when the pattern pieces are so simple. It feels like a lot of boring work. To pair things I don’t like (=all this tripple checking for matching lines) with a boring pattern doesn’t seem to have been a good idea. I am sure it will get better when i have finished the basic seams and can finally add the velvet but all this pressing and pleating and cutting and blaaahhh…it’s just not mine….
Still I am determined to finish this project. Not only because I still like the concept and want to sew a 20ies dress,also because I hate to be defeated by something as simple as that.

Third, there are things I would love to sew at the moment, other things. I had a wonderful idea for the HSF-challenge that is due today, it wouldn’t be much work either. And I planned to make my boyfriend something for christmas, I did this every year earlier in our relationship but somehow in the last couple of years I fell off.
But the plaid dress is clouding these projects and vice versa.

Now, enough complaining. What have I done?
I cut the skirt and pleated it. Admittedly that wasn’t as easy as I had thought it would be. Modern patterns usually have two marked lines, one marks the fold, the other the place where the fold will lie. These pattern pieces only had one line. Now was I supposed to make knife pleats? And with two lines close to each other that where visible as two pleats in the image? Should I make box pleats, inverted or standard? And how deep? And I had to consider this before cutting, because my pattern repeat had to be followed as well and the pleat depth adjusted to it.
In the end I made inverted box pleats on the side seams, one standard box pleat in the centre front and something that could be defined as a very wide box pleat with narrow walls or simply as two knife pleats facing the sides in the back. All pleats perfectly match the pattern, at least this was a success.

As you might remember, I removed 8cm circumference from the paper pattern because the size was too large for me. When I had finished pleating I had to realize it was still very very large, I think the hip circumference was something like 107cm (I didn’t measure beforehand because I always want to see how the original pattern was meant to look like before I adjust it). Yes, 20ies fashion is supposed to be non-fitted, but it isn’t supposed to be that wide. The magic of this fashion lies in how it hugs the figure without really touching it. So the dress shouldn’t be much wider at the hip as the hip itself, otherwise it would of course look baggy. As a consequence I doubled the depth of the rear parts of the box pleats on the sides, removing 11cm circumference (and before you ask, yes, 96cm is still more than my hip circumference. But first the skirt is going to be gathered at the waist seam a little and second I don’t want to stretch it too far, it should be snug as little as baggy). To stick with the pattern I could only increase the depth of one half of the box pleats at the side. So now they are not only asymmetric (the rear half is deeper than the one in the front, maybe I will at least sew close the excess to make it fall better) but they also shifted from slightly behind the sides to right at the sides. I am not content with this by now but can’t think of anything to change it. If the skirt will still be too large I plan to add a seam in the centre back. Like this I can remove only one pattern repeat (=5,5cm circumference, the pleats are always mirrored on the other side, so I always have to remove 11cm) and the side pleats will at least shift a little towards the back, too.

The top is in progress. I made a mistake when cutting the front parts so the pattern doesn’t match the way it should at the shoulder seams, but I think I am able to ignore that. More annoying is the fact, that the diagonal darts in the shoulder seams look like rubbish. Not because I did something wrong, it just looks weird with the plaid. Well, my hair is long, hopefully it will cover it or maybe it won’t look too bad when worn, we’ll see. At least the side seams look good and the whole thing is remotely resembling a dress.

Now I am facing the difficult decision to wether use this evening to finish the button band in the centre front or to spend it in front of the tv watching Downton Abbey as I have done already the previous nights. I’m afraid one of these alternatives is far more tempting than the other….

So much for today, see you soon, love

8 thoughts on “Somebody found my sewing-mojo?”

All photos, graphics and texts on this website are made and written by me and I hold the copyright to them.
You can always link to this blog or to single posts, but if you want to use any content I would like to be contacted via a comment or an email (e.t.t.e [at] gmx.ch) beforehand.
You are welcome to use my tutorials, photos and patterns for your personal needs and entertainment, please give credit when you publish anything made after a tutorial of mine and write me a short message, I love to see your versions!
Please note that I do not wish my patterns to be sold or used commercially.
This blog is my hobby and I don't earn a penny with it, on the contrary, I pay for the webspace and it takes a lot of my free time. So please respect this work of love.
~ ette